I was asked by Sony TV to carve a head of Peter Crouch, footballer and presenter. They were interviewing Sean Dyche, had heard about my carving of him and wanted something similar. They would however have to be quite different in style and detail. The Dyche carving was at the top of a standing tree stump, and 9ft above ground level, outside and subject to Pennine weather. Fine detail would not be seen by viewers and be bitten off by the weather The Crouch carving was to be smaller and be seen close to, so would need finer detail. 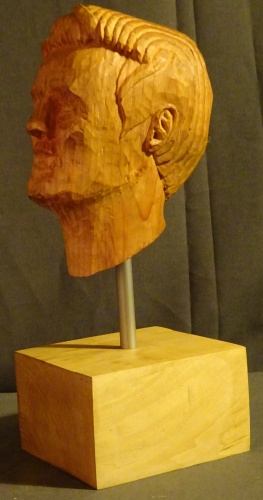 I was running out of time on an impossible time table, and took an executive decision about the hair. No celebrity has a photo of the back of their head, so I had no guide except the impression that the hair was unruly. I decided to follow the lines of the wood’s grain